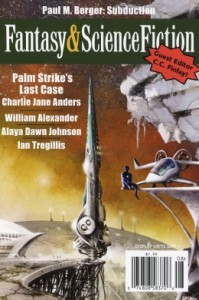 F&SF was my father’s science fiction magazine, handed to me as a child. I still have a handful of issues from the 60’s, 70’s, and 90’s. I’ve oscillated between the full and (free) digest versions of F&SF on Kindle since 2011. The free one has one story from every month’s issue and the full version has a monthly price of $.99 even though it’s not a monthly publication. If you don’t find that confusing, allow me to also point out that for the last, oh, 20ish years, their nonfiction content has included a column called “Books to Look For” and another column called “Books”. But I don’t want to dwell on the form and format of the average issue when I have a special issue to review.

This issue’s guest editor, C. C. Finlay, provided me with a paper copy in exchange for reviewing all of the stories inside. I don’t typically review magazines, and I don’t think I’ve ever reviewed every story in a collection, anthology, magazine, whatever before. So, a first for me, as seems apropos for a magazine issue with some exciting firsts. For example, all of the authors are making their first appearance in F&SF. Also, for the first time in the 65 year history of the magazine, electronic submissions were accepted.

Alas, a quick look at their website indicates they’re back to paper only submissions. The future has passed. The past is present.

Okay, one last note, and then I promise I will get to all of the fiction. 7 of 13 of the stories in this issue were written by women. Here’s a link with some averages across time for F&SF, leading up to 2006 (http://www.strangehorizons.com/2007/20070820/1women-update-a.shtml). Seven also appears to be the total number of stories written by women across all issues preceding this one in 2014. That would be 7 out of 32 prior to this special issue.

Just putting that out there.

Now, how about I review some stories.

Yet again, I failed to find the rhythm for the first couple of pages. I don’t know what it is about the way she opens stories that I’m not digging, but also, yet again, after a rough start, I really enjoyed this one.  Anders explains this particular genre mashup herself in this interview (http://www.sfsite.com/fsf/blog/2014/07/07/interview-charlie-jane-anders-on-palm-strikes-last-case/). It’s a satisfying level of violence mixed with problem solving of a far thinkier sort.

There’s probably nothing wrong with this particular story. The same way there’s nothing wrong with any particular movie failing the Bechdel test. So when I say that I hated this one, I’m not talking about this particular story as I am this type of story. The kind where some bumbling man doesn’t know why he’s special until a powerful woman explains the world to him and then fails to save it so he steps in to be the hero. The kind of story where sexual availability in a woman is an indication that she mean the (obviously, male) hero harm. I am so very disappointed to see that this is the story available in the free version of this issue. This story where the hero actually refers to a woman trying to do his job as a betrayal. Okay, maybe it is this particular story I hate as well as this kind of story.

Humor can be a challenging, slippery beast that is just glorious when done well. And this is done well. This is my favorite story. I want the animated series. I want the radio plays.

There’s an episode of Elementary that does a truly unsatisfying job of playing with this problem. One that my husband and I discussed at length after watching. At such length that after the first sentence I knew most of where this was going. Which kind of doesn’t matter since THIS IS HOW THIS IS SUPPOSED TO GO. I am so pleased to see someone get this completely obvious to me thing right.

On the one hand, I appreciate that this is clever. On the other hand, I didn’t enjoy it. Fans of farce will likely be highly entertained. I would have preferred this one if it were a quarter of the length.

The Girls Who Go Below, Cat Hellisen

I will have to give this one some more thought. It’s . . . open to interpretation. As someone who has made stringed instruments out of found objects, I intend to stick with cigar boxes.

The Day of the Nuptial Flight, Sarina Dorie

Colonists land on a planet and make some poor assumptions about the local ecosystem, but this time from the POV of a native creature. The species are interconnected in a way that makes me wonder if their evolution was a form of terraforming (like the planet in Speaker for the Dead, but not in a derivative way – this is considerably more complex in far fewer pages) by aliens not present, but I suspect that is something I am adding as the text never leans towards this interpretation. Also, there’s a scene that made me laugh so hard my husband asked what I was reading, and my response grossed him out kind of a lot.

I suspect this would have been better if it had been considerably longer. Long enough to actually have character development and conflict in addition to the big idea aspect. Or maybe that would have just been a longer version of not quite satisfying.

Testimony of Samuel Frobisher Regarding Events upon His Majesty's Ship Confidence, 14-22 June, 1818, with Diagrams, Ian Tregillis

I read this as soon as my copy arrived. I am a huge Tregillis fan (noir angels speaking physics poetry at smart women, British blood magic versus a battery powered oracle and the Nazi war machine, mechanical sharks – OMG did you know he’s writing a clockpunk trilogy, the first volume is out next spring) and this Lovecraftian naval misadventure  was no exception. With tentacles. So many tentacles.

Also just not my kind of thing, though I liked the first tale.

A dark fairy tale to be sure. A discussion of abuse visited upon generation after generation of women with an unsettling but not inaccurate ending. I’m really glad I got to read this.

The Only Known Law, William Alexander

This feels like classic, idea driven scifi, where characters are willing to take large risks with the payoff of greatly advancing the state of knowledge or, well, not. But with a modern sensibility where some of those characters might just not be men. I feel, again, like a longer version with a bit more time spent on personality would have been more satisfying, but only by the smallest degree.

A Guide to the Fruits of Hawai'I, Alaya Dawn Johnson

I have been in the mood for exactly this kind of vampire story for so long, I can’t even. There’s nothing else I can say about this one that wouldn’t just ruin the fun of reading it.

Oh, hey, I’m out of fiction to review. Overall, really quite a good issue. I’ve heard C. C. Finlay is guest editing another issue next year. That’s probably the next time I’ll trade up from the free to the full subscription.