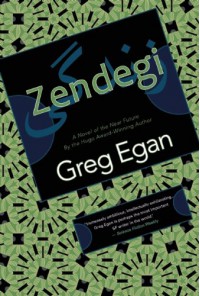 I picked this up as an audiobook last winter, when Audible suddenly got a ton of Egan's stuff. While this is a great audiobook, I'm not sure some of his harder, further flung stuff would work in this format. Greg Egan is not the sort of writer to multitask to. Hence, even this fairly straightforward one has taken me forever to finish.

Typically, Egan writes like he lives in a parallel world where novels play by different rules. A book that starts with two POV's won't necessarily merge them into a single narrative. Character development is more likely to be a side effect of deliberately rewiring their own brain than anything resembling any part of the heroes journey. Sex can be both consensual and unsatisfying for everyone involved. And explosions? Those are the stuff of news reports to be read by characters.

Don't mistake that for complaining. I am grateful to whatever team of physicists has built the device that allows us to access manuscripts from dimension Egan. (I do wish their methods had been refined enough to capture all of the figures that should have been included in Incandescence. I had to draw some of my own to keep up.)

In other words, he has a unique voice. One that might be difficult to get into.

I'm going to suggest starting here, his most accessible book. The one that complies the least with what I've written above. The humor is still highly intellectual and the plot favors ideas over action scenes, but he's included emotional contexts that actually seem human. Which I know sounds like a slight, but isn't. So often his characters are so far removed from today's humans that it would seem stranger if they sounded like us.
I have a whole new appreciation for just how strange and wonderful his other worlds are now that I know how well he can write us human people.

This book is plotted around Iranian politics, AI, and personal triumphs and tragedies. The POV is split between an Australian journalist making a new life for himself in Iran, and a refugee who finished graduate school at MIT before returning to Iran to manage a software development team. His is a story of reacting to circumstances and hers one of living with her own choices.

Near future is a genre I feel like I should like more often than I do. Early adopter, engineer, gamer me should be in love with anything describing tomorrow. More often than not, though, I find myself bored with overlong passages describing today's technology and frustrated with character's still espousing decades old gender politics. Not here, though. Oh, no - this is just about everything I want out of near future.
In other words, this was quite good.

If I have to complain about something, I'm going to have to go with the packaging. Here is yet another instance of Invisible Woman Syndrome. Where a substantial potion of the narrative is carried by a female POV who fails to make either the cover or the blurb. I can't be too hard on the cover as none of the four I've seen feature either character, but here's the description for the Audible, Kindle, and Hardcover editions:


"Set in a near future Iran (where the theocracy has been overthrown, but where Muslim religion still dominates the culture), an Arab/Muslim focused MMORG gaming companies cutting edge AI software might hold the key achieving "uploaded consciousness."

Martin is an Australian journalist who covered uprising and overthrow of the Iranian theocracy, and has since “gone native” with a Iranian wife and child. As tragedy strikes his multi-cultural family, Martin struggles to maintain his place in his adapted culture, and to provide for his child.

Zendigi explores what it means to be human, and the lengths one will go to in order to provide for ones children. This emotional roller coaster explores a non-Western-European near future that both challenges ideas of global mono-culture and emphasizes the humanity we all share."

The paperback edition is the only one that bothers to mention Nasim, and HALF OF THIS BOOK IS TOLD FROM HER POV. Yeah, marketing team, I can see how, when one of your two main characters is a scientist, a manager, competent, thoughtful, from the country the book is set in and working on the thing the book is named after, you'd wan the copy to exclusively focus on the straight, white dude. I'm sure this is a simple oversight related to lots of reasons with nothing to do with her race or gender.

I swear to Gouda, browsing by covers and descriptions has got to be the worst way to pick out books. Even when they aren't packaged with outright lies, they're packaged in ways that totally fail. I wonder how many books with interesting, intelligent women I miss because they're packaged to keep me from knowing that.