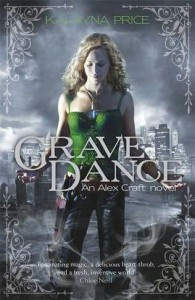 Well, so much for that series. The only two things about Alex that interested me don't exist any more. What's left is a blend of the worst tropes of romance novels and Fae politics. Blech.

What were those things I found interesting before? The potential for a sexually progressive heroine (which was already a bit of a FAIL in the first one), and a woman who's powerful in a way that isn't ass-kicking. I also love magic with a cost, but the cost in this one seems to be so conveniently variable that I'm not sure it counts.

The easy one first, non-offensive power. We're told over and over throughout both books that her form of magic has no offensive capability. She has shields and charms that all require advanced preparation. And she likes to bring a knife to a gun fight. You'd pretty much have to construct a new type of creature for her to be of any use in a fight so basically that's what happens in this book. They send wave after wave of monsters after her that have weaknesses designed for her (and early on *only* her) to exploit. Come on, evil, get a clue! (This is also ignoring the fact that she can actually kill just about anyone; she just doesn't want to. That isn't the same thing as not being able to.)

The other, well, I just shouldn't have gotten my hopes up. In the first book, she talks a good game about her random hook-ups, but the only sex scene in the book paints her as, at best, naive and inexperienced. In book two, we find out that part of the aftermath of the climax of the first book (plot wise, supposedly) is that she has stopped having sex all together because it wouldn't be pleasurable. Unless it was with one of the two dudes in the inevitable love triangle. Both of whom spend this book treating her like a piece of meat.

Hint ladies: if he has no respect for your personal boundaries, he's an asshole; if you tell him no and he still treats you like an object, he's a criminal asshole. If your no means yes, you are a part of the problem.