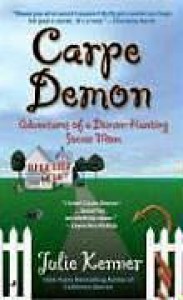 Not my cup of tea. The concept is really appealing. What if Buffy grew up and started a normal life? And by "Buffy," I mean your average ass-kicking young girl from urban fantasy, not actually Buffy Summers. The execution is somewhat lacking in that the narrative pretty much feeds you every plot twist in advance. You don't have to worry about missing any of the sarcasm because it tends to be followed by, "that was sarcasm in case you missed it."

It didn't help that I had no investment in the main character. Day one of the story and she's already expressed pride in her husband for appropriating taxpayer funds for personal benefit and casual homophobia. She complains constantly about how much she has to do and how inconvenienced she is by adding less-hours-than-a-full-time-job to her mommy commitments, but when I look at the sum total of her workload and the oft mentioned state of her house, and compare it to that of parents I know, my friends come out ahead in every way. Her time management skills suck monkey balls. Her big emergencies fall into two categories: (a) social obligations she committed to a while ago that are totally trivial and could easily be canceled if it wasn't just at the last minute that she remembered them and (b) social obligations that her husband throws on her with less than a day's notice. I would hold (b) against him, but since she (while complaining a lot to the reader) doesn't indicate to him that this isn't okay, I find myself lacking in sympathy. Also, they've been married a while so maybe (a) is such an obvious and recurring problem that he goes with (b) rather than waste the energy being mad at her for inevitably forgetting. Her side of the relationship is largely built on deception and manipulation so why shouldn't his be?

I think that the other, larger issue is that I have been reading Daniel Abraham's thoughts on and Carrie Vaughn's books in the urban fantasy genre. I've set expectations for my heroines as higher than "can hit really hard," and that's really the only thing Kate Conner is good at (even out of shape and out of practice). Whatever the person recommending this to me meant by "What if Buffy grew up?" what I heard was "What if those young girls matured?" and that's what I wanted. I don't think that having children is, in itself, an indication of maturity and that's the only difference between Kate Connor and high school Buffy - a shift in focus from fighting to defend her friends to fighting to defend her children. She didn't so much mature as just get old and out of shape. A more accurate thesis might be, "What if Buffy quit after Season 1 even though evil was still out there and then spent 15 years pretending the world was safe? Also, instead of resourceful allies, now she has kids."
Tweet