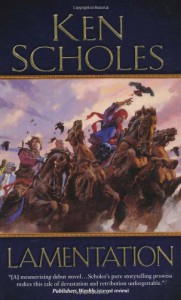 I liked this more than I would have thought from the first third. The prose is a little too pretty to feel gritty, but not irritatingly over stylized. The end has enough resolution to allow the story to function as a stand alone while maintaining hooks for a series.

I'd be a lot more eager to read the next one if the only female POV character didn't go from pretending to be all independent minded while actually doing every damned thing her father told her to to being all "ZOOMMGGG MUST HAVE BABY!" There are only 2 female characters of any significance and the other seemed like a more interesting head to be in.