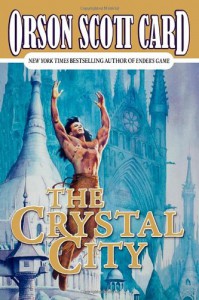 Late in his career, Asimov tried to bridge the gaps and combine some of his series into a single, cohesive universe by writing new books that crossed characters and events between them. These were not nearly as good as his earlier works.

Card has elected to go a different route with this one. Rather than try to find a single universe where the Maker magic of this series could co-exist with the aliens and technology of the Enderverse, he's elected to turn both into instructional texts for the proper behavior of ladies. Because, really, strictly enforced gender roles based on rose-tinted imaginings of the golden age of the 1950's is essential in this day and age where 99% of popular media already supports the narrative the women love to have and raise babies more than anything else. It's what they're made for!

Also, if you can't tell already, there are going to be a lot of spoilers for this book, this series, and the Shadow series.

I don't think I can write a rant about Petra's transformation from intelligent, adaptable, strong character to ZOMG BABIES MUST HAVE EVEN IF BEAN NO WANT caricature in the Shadow books that would even approach comprehensible. TOO MUCH RAGE. So I'll try with Peggy instead.

No need to rehash the nearly incoherent plot scraping together a few items to tick of the list of Joseph Smith's life reimagined to not be about a charlatan who started a couple of fake religions before stumbling into one that he could sell well enough for it to now be so powerful and rich it can ban gay marriage in the vast blue stronghold of California. Really, the only major thing that happens is Peggy opting to no longer see into the future because if she could, she would know all about the other wives he's never going to mention. (Or at least I assume that will be the outcome - I can't imagine how hard up for fiction I'd have to be to pick up this series ever again.) Let's just skip to the last chapters.

At the end of this book, both characters have reached the same conclusion: that the Maker has given them a gift so powerful and important that they must devote their lives to it's usage above any other Earthly concerns. In the case of Alvin, he's been given a Knack way more powerful than anyone else on the planet (with one possible exception). Obviously, God wants him to build some better world with it even if it costs him everything he cares about. The possible exception for most powerful knack? His wife, Peggy, who can see possible futures and has been using her gift to try to end slavery without falling into the bloodshed of a great civil war. In the course of this book, she miscarries and assumes that the cause was her anti-slavery activities. She concludes from this that the powerful gift God has bestowed on her is the ability to have babies. You know, that same fucking thing the vast majority of women for all of time have been doing. And that she should make babies to the exclusion of freeing slaves and avoiding wars and anything else she might be tempted into by her precognitive abilities.

So, yeah, God is fucking asshole who makes men have to guess how to use their unique strengths for His purposes while tempting women with powers they shouldn't use to improve the world because their sole function is to serve as incubators for great men.

I am still angry that I spent money on this shit. I wish I could give it negative stars.
Tweet