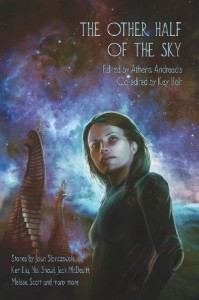 The premise of this anthology is interesting, not just because I’m a woman, but because 4 of my favorite recent short pieces would all easily have fit within it. And when I say favorite, I mean things I liked enough to include in my Hugo nominations. The strength of those tales may have set my expectations a bit high for this collection. (3 made the final ballot and one of those won – but I am getting off-topic).

The Other Half of the Sky takes the familiar shape of nearly every anthology I’ve picked up in the last 5 years. A strong start, tapering off towards mediocrity, bouncing back in the middle, and then tapering off again quickly. The last two stories are pretty solid, so I guess it’s nice to see it doesn’t end on shit. But the best story is the first one. It’s not even close.

Seriously, I’m considering starting all anthologies from the last story and working my way forward just so I have something to look forward to.

The trend of cramming a novella’s worth of content into a short story length also continues with not one, but two examples. “Landfall” presents an interesting enough world that I’m interested in spending more time there. Alas, there are so many ideas, so much novelty, so rapid fire in presentation that there’s no chance to catch one’s breathe or get swept away. It’s exhausting. Meanwhile, “Velocity’s Ghost” seems to be missing a few pages towards the end. Maybe that explains why my copy’s page count is 15 short of what goodreads thinks this anthology should be?

And while I really don’t want to name names, yet again, an anthology is weakened by not culling some of the weaker pieces.

The introduction makes the claim:

So I decided to do some conjuring of my own: I’d produce a collection in which women stand as protagonists, rangers, and agents of destiny in unimagined universes that treat them as fully human – and at the same time, maybe strike a blow for SF as quality literature in its own right.

Congratulations on the first half, anyway. As for the second . . . hmm. Dropping 3 or 4 stories specific stories would have bumped my rating up to 4 stars.

Andreadis also claims that this collection doesn’t contain “clichés you bump into when you browse the kitschy softporn in the SF/F section,” and then makes a list of examples, which includes ones found within these pages:

* No concubines – That means every sex slave on screen is male, bonus points for child sex slaves (I don’t see as an improvement or even all that novel).

* No “women with obedience spliced into their DNA” – Aside from nearly the entire female population of genetically engineered, nano-tech enhanced slave labor one story revolves around.

* And perhaps we have different definitions of Alpha Males since I noticed them in Liu’s, McFarlane’s, and Johnson’s contributions.

Complaints aside, there were a handful of stories in here that I loved. This anthology is worth picking up for:

And maybe you’ll find the rest better suited to your tastes than I did.
To return to the aside of the first paragraph, the 4 stories I alluded to are:

Those you should definitely check out regardless of your interest in this anthology.