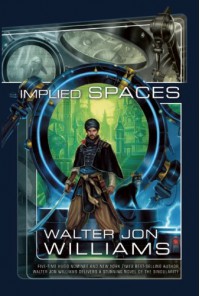 There are a lot of ways that this was a fun, light adventure, with sword fights and robot battles (though not at the same time). But rather than praise all the kitchen sinky wormholetastic goodness herein, I find myself dwelling on the parts I didn’t like. And, oh, how I wish that was confined to my confusion that credits and treasuries exist in a post scarcity society.

(Which basically means I’m going to spend the rest of this review talking about gender. So if you’re a SF fan lucky enough to not give a fuck about gender, and the absence of queer characters in a future, near utopian society isn’t going to bother you, by all means stop reading this review and go read this book – it’s pretty much for you. There’s even a talking cat. You’re welcome.)

I don’t think the strictly heteronormative viewpoint of the protagonist would bother me at all if the entire universe didn’t seem to reflect his absolute gender definitions. There’s a conversation fairly early on where he’s asked if he’s tried a female body (by a woman who did a short stint in a male body, but foolishly selected an average size dick) and his (unquestioned then and never again referenced response) is that he can’t consider it because he’s attracted to women. Apparently that requires a penis. I’m left with no understanding of why that conversation (and particularly that line) are included since it doesn’t ever seem to become relevant. Actually, no, it was a conversation designed to assure the reader that our humble narrator is swinging serious pipe.

I admit, I was sort of hoping that when he ran into his "evil" twin self, she would be a woman or that there would be some sort of malfunction that left him in a woman’s body, but, alas. And I put evil in quotes because I don't want to imply that he's good. By anti-hero standards, he might look that way, but he's . . . kind of skeevy. This is established early on when he beds a woman he both (a) tells himself is tots legal, (b) refers to as a child while discussing his conquest with his traveling companion. His second sexual encounter pinged pretty hard against the "I am not a puzzle box" blog post. The one towards the end, I almost didn't finish the book because of. I'm just going to throw out the spoiler that he doesn't actually fuck the falling down drunk woman he's taking back to his room. The one who isn't even who he wants to spend the night with. And this is our protagonist. Sigh.

And while people change height and coloration, and there’s some mention of extra limbs for the sake of awesome in the WoW pocket universe, he doesn’t meet anyone who has permanently changed the sex they were assigned at birth or isn’t heterosexual. Because what doesn’t seem to exist, in this wonderland of body modification technology and immortality, are any representations of QUILTBAG people.

And while there are plenty of interesting, intelligent women, it’s seems like they’re mostly around to grease his cock, or let him reminisce about when they last greased his cock, or for him to wonder how best to get them to grease his cock…. And this definition of women by what man they fuck is also reflected in society at large, where a woman designs and conducts an experiment to answer the question of the life, universe, and everything, and the resulting dataset is referred to by her boyfriend’s name. Really.

As modern as the reference points are, the story feels pretty out of date. I was going to try to figure out which of the old white dudes I grew up reading this reminded me of (and in spite of this being a scholar and poet as comfortable with swords as supercomputers…he’s not at all the right point for comparison), but Lightreads has already figured that one out.

And all I got out of the final chapter was that no matter how advanced our technology, the power fantasies our society constructs will still require the subjugation of women.

I can’t tell if the hero and villain’s discussion of what responsibility the creators of their universe bear for the unintended consequences of their creation is intended to say anything about the relationship between the implied spaces of Implied Spaces and its author. If it is, bravo on the moniker “the Inept.”

If this is the kind of stuff that will bother you, please consider reading [b:Excession|12013|Excession (Culture, #5)|Iain M. Banks|http://d202m5krfqbpi5.cloudfront.net/books/1288930712s/12013.jpg|1494164]instead. That starts with a hypermasculine character in a repressive society, true, but actually spends some time examining gender and sexuality in a post scarcity society.