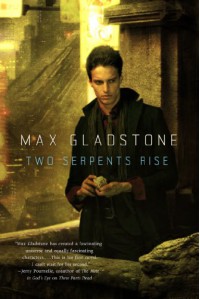 There's a lengthy article on the pro's and con's of reading the Craft Sequence in chronological vs published order that I should probably care about. I've got an omnibus edition that put them in publication order, though, so that's what I'm doing.

A rather underwhelming follow up to the excellent Three Parts Dead. In terms of events, this is a prequel, but it was published second. There are some quite good scenes and excellent sentences, but overall, the plot is just some stuff that . . . happens? This isn't a mystery so much as a series of bad things being triaged without any real attempt to identify the underlying disease.

I don't know. Maybe if the last few books I've read hadn't been so outstanding, this would have been a better read.

The main character isn't so much a protagonist as an unwitting minion who can't get a clue short of skywriting, and, once the villian is revealed, even then has some questions before he'll deign to understand. After watching him fail to read people spectacularly and argue inflexibly in the face of contrary evidence, I could never believe he was either good at poker or an effective risk manager. He lacks verisimilitude.

DUDE. HER NAME MEANS BAD. IT'S HER FUCKING NAME.

But excellent setting. I'll read the next one in the hope it is a better fit for my tastes.