Review: Ghost Girl in the Corner 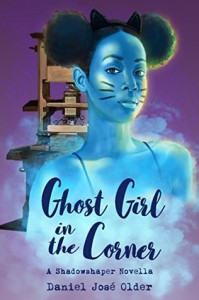 I was going to plunge right into Shadowhouse Fall, the sequel to the excellent YA UF novel Shadowshaper, but noticed there were 2 novellas set between the novels. This is the first, and follows a secondary character, Tee from the first novel.

A satisfying read that leaves open a potential new threat for the novels in the series while still reaching a conclusion for the mystery of the ghost girl.

This story also has the cluelessest of white ladies who wants to make sure everything has a happy, optimistic twist to it. I definitely have worked with that lady. 100% guaranteed to be colorblind. I kind of wish we'd gotten a little more resolution there. Tee's journalism project is left off at a point where the white lady wants to talk about potential misuse of funds, and having finished both novellas and half the next novel, this hasn't come back up.

The printing press hasn't been mentioned at all in the other stories. Like this short was meant to introduce some stuff to the series for later, but the rest of the stuff it is built from doesn't exist in the novels. At least not yet. Having read Older's Bone Street Rumba trilogy, it may just be further out in the series that this comes back into play.