Review: Food of the Gods 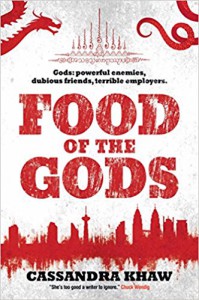 I encountered this by way of a tweet from the author quoting a sexist negative review that compared the gore herein to Kameron Hurley as though that were a bad thing. So of course I purchased it immediately.

This is two shorter works with the same protagonist presented in three parts. The protagonist is a cannibal chef, not in that he eats people, but that he cooks them for gods. Gods who are almost universally assholes wielding binding contracts and treating humans like so much meat. Are the Gods patriarchy, capitalism, or just assholes, many readings will work.

The first part is an entire noir detective novel in a single act without drenching the protagonist in misogyny. On the one hand, it never feels slow, on the other, Khaw somehow found room to squeeze in a workers' rights discussion. Part of the break neck pace is the way world building is integrated into action sequences and gore feasts. Khaw taking the approach that her reader has probably read some urban fantasy at some point and doesn't need a tutorial. And that her reader also has the internet if they need to look up some entity in some pantheon.

Part 3 is love and splatterpunk with tentacles and I am so very pleased to have found yet another bloodletting feminist good time this year.

If you thought American Gods had some neat ideas but was kind of long winded and had a boring protagonist, may I suggest this as an alternative?

I had never heard of Khaw before, but now I want to read everything she has published. I've already downloaded her latest, Bearly A Lady.