Review: A Pocket Full of Murder 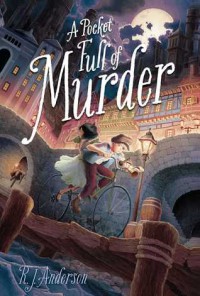 A good opening scene, followed by a somewhat muddy first third. There's a lot of world building to take in, and while I appreciate that the story doesn't pause to explain it, I can't help but think maybe a little more exposition up front would have enhanced my enjoyment.

That said, the second half is great. I'm looking forward to reading the sequel.

My favorite part is watching the protagonist try on different theories, and use evidence to sustain or reject them. She keeps finding new information and trying to construct a cohesive picture. And while she isn't without blind spots, it's wonderful to see her make both wrong turns and brilliant connections as she investigates.

I also enjoy the magic system. I don't think it's an accident that most of the appearances of someone doing "common magic" are women, while most of the wealthy, affluent form of magic is practiced by men. It's not actually divided by gender, more by class, but it mirrors some other historical allocations of things. Midwives vs doctors, for example.

And I like that common magic is basically baking. Baking rarely gets acknowledged as practical chemistry.