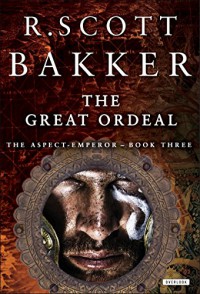 Had a chat with a friend about this one a few days after it came out. Five years ago, we read the previous book in this series. This is the third book in the second trilogy in a post apocalyptic brutal fantasy series. We read the first book about 12 years ago.

He said he knows his reading tastes have changed and that he wonders if this will seem more misogynistic than he recalls the series being, not because it is, but because he knows he has a different perspective.

I told him I could still remember the feeling of relief when reading the previous one, that the soldiers started calling the women's camp "the grainery" because, at last, 5 books in, there was finally a term for women other than peaches - a derogatory term that crossed all class and culture boundaries in the original trilogy.

I'm not sure how far my friend has gotten, but I'm only a little into this door stopper. There's a summary at the front of each one to remind the reader of the various plot threads from previous giant door stoppers. Well, that and to make sure we know some woman's clothes were ripped off - a detail I can't seem to be convinced is plot relevant, but is apparently something super important for us to recall 5 years later.