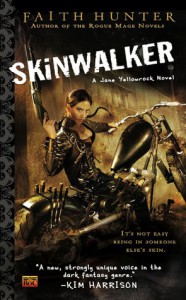 I've had this sitting on my Kindle forever. I'm pretty sure it was one of the free books I picked up the first 3 months I owned a Kindle. Most of those books were, uh, not good? I still have a few I haven't tried opening based on how not good some of the ones I tried were. But recently a friend was talking this up in a way that made it sound like my kind of thing.

Turns out this is my kind of thing.

Does she have a job? An actual, for tax purposes, job? Yes. Yes she does. Bounty hunter, with a website, contracts, and everything.

Does she have meaningful interactions with any other women? Knocking this one the fuck out of the park, yes she does and they've known each other for a while.

Does her origin story not include a rape? For fuck's sake, why do I even need this criteria? Yes, rape free access to supernatural powers.

Does she like to eat? Oh, yes. Yes she does.

It could use maybe just slightly less "all men think she's irresistible," but as on the supernatural side, that's cause for her to be on guard, I guess it works alright.

I don't want to get to heavy into spoiler territory, but the specific ways in which a skinwalker is not a were push so many of the right buttons for me. I love that they don't have the same goals. I love the uneasy alliance, the mix of support and power struggle. This is fucking great.

Will read more in this series.