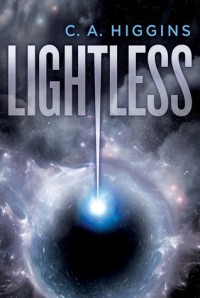 I like the idea of this book far better than the actual book. And when I say that, I don't mean the set of lies and spoilers that is the back cover text (seriously, spoilers in your book description, publishers? seriously?!), but the inverted YA dystopia that is this book. Our narrator for most of the book is a woman with a PhD working on a ship she designed and built the computer for. She's one cog in the giant machine that is the System (really, it's called the System) who isn't struggling against the oppressive regime so much as working amiably inside it while concentrating on her own stuff.

There's very little action, and most of the book is either her making endless repairs, or another woman interrogating (read: talking to) a suspected terrorist. Based on the POV characters, this is a book about women with vastly different roles in an oppressive society.

Except that it isn't.

This is a story about a young man trying to survive outside of the system (see, that time I'm speaking thematically) getting caught and having his strength tested. As examined through the eyes of the women around him.

Will they figure out what they need to?

I find it conceptually very interesting, but in practice . . . .

The narrator who I'm supposed to find sympathetic annoyed the shit out of me. She's really not a big picture thinking. She makes a series of judgement errors involving not reporting critical information, not because she's against the system, but because she doesn't like the way the interrogator looks? I don't even know. She seriously goes down this train of thought around the 10% mark where she decides she hates this woman because based on what she's wearing, she's clearly the kind of woman who will laugh at a woman her behind her back.

Seriously, the entire last act of this book could have been avoided if the mechanic hadn't been so determined to avoid any interaction with the interrogator. BASED ON HOW SHE DRESSES.

She's inadvertently a giant walking lesson in why you should follow orders.

The second narrator, the interrogator, has her shit together, but is also rather flat. She serves more as a means for the prisoner to tell stories to the reader through than as a character.

The third narrator, now she's pretty awesome. I kind of want to pick up the sequel because, damn, that's a great character.

And I might. The writing is decent. The pacing is solid. There's some interesting content. All the non-POV women in the book were also excellent.

And I might not. Because, wow, do I not want to hear anything else from the mind of that first narrator.