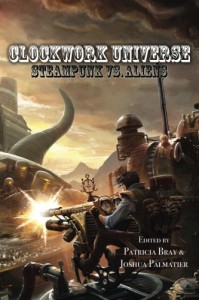 Kickstart anthology, and I was a backer.

I’ve mentioned before that anthologies frequently conform to the same shape. Not a bell curve, but one that starts high, drops rapidly, rises again towards the middle, and tapers off less sharply towards the end. Really, I should draw this Standard Anthology Curve some time and plot a few anthologies against it. This anthology most certainly conforms to that expected shape. And yet again I started at the front and worked back, instead of starting at the back, knowing I had something to look forward to eventually.

I’m reading 5 different anthologies right now, and none of them straight through. I just pick one up and read the next story every so often. I feel like this book benefited from being put down frequently. If I’d been trying to plow straight through on my way to a next book, I’d have given up 5 or 6 stories in. This review is a collection of notes on each story, written as I read. Occasionally edited upon reflection.

“The Cavorite Job” by Ian Tregillis. From the title, this is obviously going to be a heist story with a certain gravity (har har). So much worldbuilding in so few pages, with action, and humor, and physics. Really a strong opening story.

“Gracie’s Fire” by Leah Cutter. A charming short story, about a barmaid’s encounter with aliens. I liked it, and thought it was about the perfect length. I also recently flipped through Dave Arnold's new book, Liquid Intelligence, and I suspect he’s building one of these machines.

“Quinta Essentia” by Bradley P Beaulieu. This is the first story set in England. Aliens have invaded, but seem to be ignoring everyone. Scientists are up to mad experiments. This a fun conceptual space, but I just could not get into this one at all.

“When Comrade Ekaterina Died for the Motherland” by J. R. Hargenrader. Hmm. Of all the stories in this collection, this one feels the most like the result of a classroom writing assignment. It’s . . . paint by numbers story telling. Competently written, but containing nothing.

“A Clockwork Alien” by Gini Koch. Wow. Not bad, exactly. But. That’s one of the stupidest things I have ever read. Just amazingly dumb. Usually, if I don’t like a short story, I feel like at least it wasn’t that much time lost. This? I felt the slow drain of vitality as each tick of the clock pushing me closer to my own death while reading this story. I will never be as young or as smart as the woman I was before I read it.

“Heart of the Empire” by Jason Palmatier. I take back all the bad things I said about the previous story. This one I couldn’t even finish.

“The Red Queen and the White” by C. B. Pratt. Oh, finally, a break. This one was fun and interesting. Quite enjoyable.

“The Wizard of Woodrow Park” by Jean Marie Ward. I dig the concept, but not the execution. Great title and there’s some fun bureaucracy shenanigans in one scene. But. Rather than try to explain what I mean, I am going to quote a single sentence:

“The dogs took off like someone ignited their farts.”

“Of War and Wings” by Tansy Rayner Roberts.  Less a plot, more a collection of impressions through an invasion. It struck me that this would make an amazing graphic novel, and now I cannot get that thought out of my head. Please, someone, do this. British girls across multiple social classes all geared up in brass and leather armor with wings battling over London. The ruins of a grand structure explored by a small alien as the final battle ensues. Come on, it will be amazing.

“Airship Down: A Sound and Fury Adventure” by Gail Z. Martin & Larry N. Martin. Also not my cup of tea. Is this one of many adventures staring these boys that I should just pass on in the future?

“Steamsuit” by David J. Fortier. Starts well and takes turn after turn for the dumb. This is Hollywood blockbuster action movie dumb, but with that oh so rare female lead.

“Fingers of Steam, Veins of Gold” by Brad Hafford. A neat story in the form of a series of letters sent home from a mining rush. Very cool idea and good executed.

“Heart of Clockwork” by S. C. Butler. This story starts with,

"Like watermelon seeds from the mouths of spitting children, a hundred Jovian saucers burst from a hundred dimpling puckers across the dome of the African sky."

And I didn’t get much further before abandoning ship.

“Lady Antheia’s Guide to Horticultural Warfare” by Seanan McGuire. I’d already drunk the McGuire cool aid, and I have a soft spot for carnivorous plants so of course I love this closing story.

I often don’t enjoy steampunk as much as I expect to. Steampunk as a genre is defined so heavily on set dressing that I have a hard time telling what will and won’t work for story. Combining it with alien invasion sounded like a winning recipe. A few in here work quite well, and a couple were completely unreadable to me. Such a mixed bag, I can’t even rate it.